You think climate change is a problem for Mason Bees!

Insect apocalypse’ poses risk to all life on Earth: Half of all bugs have been lost since 1970 and 400,000 species face extinction due to heavy use of pesticides, a report warns

By Milly Vincent For Mailonline

Approximately half of all insects, including Mason Bees and Leafcutter bees have been lost since 1970 due to the heavy use of pesticides, which could spell disaster for all life on Earth, a new report suggests.

Conservationists have called for action to be taken to halt the ‘unnoticed insect apocalypse’ in order to prevent a ‘catastrophic collapse of nature’s ecosystems’.

Leading ecologists at the University of Sussex, who carried out the report for the Wildlife Trusts, revealed that 40 percent of the one million known insect species, like mason bees, are now nearing extinction.

The use of pesticides, which has doubled over the last 25 years, has seen 23 species of bees and wasps go extinct.

Without insects, a multitude of birds, bats, reptiles, amphibians, small mammals and fish would disappear, for they would have nothing to eat. 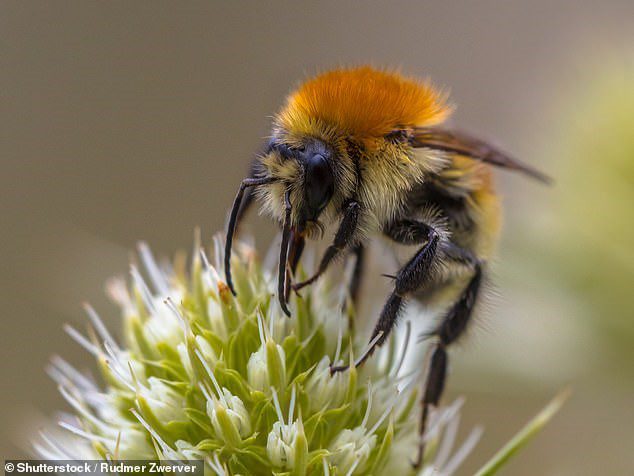 The use of pesticides, which has doubled over the last 25 years, has seen 23 species of bees and wasps go extinct. The image shows a picture of the Great yellow bumblebee which is now extinct in the East of England and in the UK (stock)

Eighty-seven percent, almost all plants require animal pollination, most of it delivered by insects – meaning the global human population could not be fed without insect pollination.

Put in financial terms the ‘service’ insects deliver to humans by pollinating their crops is worth between £183 billion ($235 billion) and £449 billion ($577 billion) per year worldwide, the study estimates.

The study details how insect populations could be rescued if the agriculture industry stopped the use of all pesticides, routine and unnecessary.

Humans must also foster environments around them to become insect-friendly by planting wildflowers and utilizing unused spaces such as road verges, for wildflowers, that will feed mason bees and leafcutter bees claims the study.

In order to rescue insect populations, the agriculture industry must stop the use of all pesticides, routine and unnecessary, claims the study

Professor Dave Goulson, at the University of Sussex, UK, who wrote the report said: ‘We can’t be sure, but in terms of numbers, we may have lost 50 percent or more of our insects since 1970 – it could be much more.

‘We just don’t know, which is scary. If we don’t stop the decline of our insects there will be profound consequences for all life on earth [and] for human wellbeing.’

He states we cannot wait for future research to spell out the catastrophic decline and must act now.

Professor Goulson believes the UK’s departure from the European Union could aid the massive change needed in farming infrastructure to overhaul the use of pesticides.

He told The Guardian: ‘Whatever people think of Brexit, there is this potential opportunity to completely revise our farming system.’

The conservationist hopes funds will be made available to recover pesticide riddled habitats the study calls ‘green deserts’, possibly by placing a tax on the pesticide chemicals.

He told the publication: ‘The bigger challenge is farming – 70 percent of Britain is farmland.

‘No matter how many gardens we make wildlife-friendly, if 70 percent of the countryside remains largely hostile to life, then we are not going to turn around insect decline.’

The research claims 250,000 miles of UK road verges could be sowed with insect-friendly seed mixes, mowing later in the year and removing the cuttings to provide a useful habitat.

In the UK 430,000 hectares of gardens could be utilized to help pollinators such as bees if owners let go a bit’ and leave plants un-pruned –  a network of small green patches to help them thrive in urban areas claims the report.

Since 1950 the study estimates that the UK has lost 150,000 miles of hedgerow, 50 percent of downland, 98 percent of wildflower meadows and 50 percent of ancient woodlands.

Although the insect decline may not be immediately obvious to humans Professor Goulson writes: ‘The only aspect of insect declines that have impinged on the consciousness of significant numbers of people has become known as the “windshield phenomenon”. 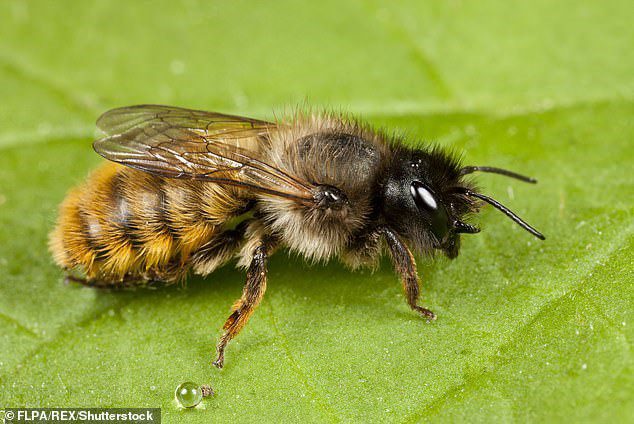 In the UK 430,000 hectares of gardens could be utilized to help pollinators such as bees. The image shows a Mining bee

‘Almost everybody over the age of about 50 years old can remember a time when any long-distance drive in summer resulted in a windscreen so splattered with dead insects that it was necessary to stop occasionally to scrub them off.

‘Driving country lanes at night in high summer would reveal a blizzard of moths in the headlights.

‘Today, drivers in Western Europe and North America are freed from the chore of washing their windscreen. It seems unlikely that this can be entirely explained by the improved aerodynamics of modern vehicles.’

Butterflies are also suffering the effects with a 77 percent in the decline of butterflies who require specialist habitats since the 1970s and a 46 percent fall in generalist species of a butterfly who are hardier to human activity.

Species of the animal who rely on the presence of flying insects for food have also struggled, such as the spotted flycatcher bird, whose populations have drastically fallen by 93 percent since 1967.

He states that today’s children will grow up in a world with fewer birds, flowers, and insects than we have now – and will be told of a time when hedgehogs were once common.

Scientists believe the is in the midst of the ‘sixth mass extinction event’.

The report claims public perception of biodiversity loss needs to shift its focus from larger animals – such as the northern white rhino or birds such as the dodo- to insects and smaller vertebrates such as fish, amphibians, reptiles, mammals, and birds, whose populations fell by 60 percent between 1970 and 2014.

WHY ARE BEES UNDER THREAT?

The threat to bees includes loss of habitat, including pollution and pesticide use and climate change.

Habitat loss, fragmentation, and degradation is generally thought to be the most important factor driving bee declines through the reduction of food and nesting resources available to pollinators.

These losses are as a result of changes in agricultural methods such as re-seeding, intensive tillage, drainage, and use of fertilizers and herbicides as well as the development of previously species-rich grassland.

Neonicotinoids are neuro-active chemicals similar to nicotine that have proved to be highly effective at protecting crops from pests, especially aphids and root-eating grubs.

They can either be sprayed on leaves or coated on seeds, in which case they infiltrate every part of the growing plant.

Years of research have shown that under controlled conditions the chemicals are toxic to honey bees and bumblebees, causing brain damage that can affect learning and memory and impair their ability to forage for nectar and pollen.

The chemicals are a key battleground in the environmental movement – with campaigners demanding a ‘complete and permanent’ ban on the pesticides as they are suspected to be harmful to bees.

Alterations in insect distributions in the UK are already being seen in response to recent climate change.

Climate change may also aid the natural colonization of new species, as has already been seen in Britain with bees such as Grey-backed mining bee, Early colletes, Ivy colletes, and Variable nomad.

These effects are worse for specialist or species found in single habitats, and small, isolated populations.

Climate change is widely predicted to increase extreme events such as summer droughts, flooding, and storms, all of which could directly impact bees in the East of England.