It’s like sending bees to war: the dangerous journey to the California Almond orchards. 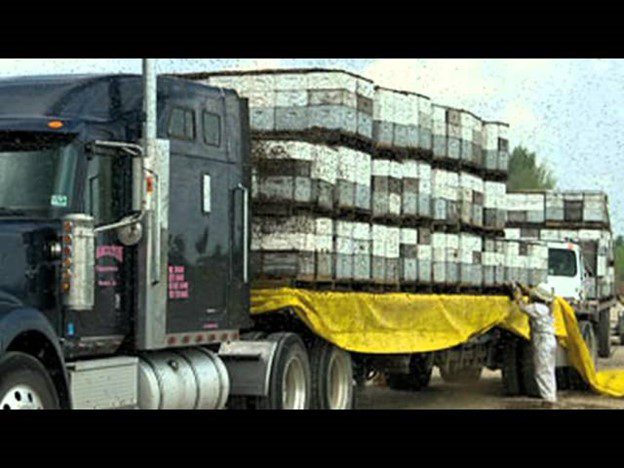 Millions of beehives are coming into California from as far away as Maine as the almond orchards get ready to bloom next month.

Twenty years ago, growers were charged $20 for a beehive in their orchard. The cost is now $220.

The bees are vital to pollinating the crop, but the drought and other factors are making it difficult to ensure their survival.

California is home to 80% of the world’s almond supply with over 2.5 million acres of orchards — a $6 billion crop. Almond growers are bringing in beehives to their orchards but the supply in California is limited. Mason Bees or as many growers call them Blue Orchard bees, are coming in as reinforcements.

At two and a half beehives per acre, so you can imagine we need well more than 2 million beehives to cover all the California almond acreage and there just aren’t that many beehives in California. With Mason Bees we only need 400 working females per acre.

California supplies about 500,000 beehives, but another 2 million will come from out of state. Essentially, California will need about 70% of all the beehives in the U.S.

“Lately, with colony collapse disorder, and drought, and climate change, and habitat loss, and newer and stronger pesticides, we’re losing 40% of our hives,” said Michael Eggman, a beekeeper in Stanislaus County.

Eggman said he has to keep his bees in Washington State for much of the year because the drought in California has dried up wildflowers and plants that bees need to forage — and feeding them syrup goes only so far.

“It’s like you and I trying to be healthy on Gatorade and granola bars,” he said. “We might hang in there but we’re not going to thrive. Now having said all that, let’s consider the past 12 years of California’s drought. It’s been a food desert for bees.”

Eggman said it’s also a case of supply and demand. Over the past few years, demand for almonds has skyrocketed. Almond milk, almond butter, and a host of other almond-based products have entered the marketplace.