What is that Crackling Sound

A light crackling sound floats above a field in northern Switzerland in late summer. Its source is invisible, tucked inside a dead, dried plant stem: a dozen larval mason bees striking the inner walls of their herbaceous nest.

The grub-like larvae use calluses to tap their cocoons in a curious chorus inside a plant stem. 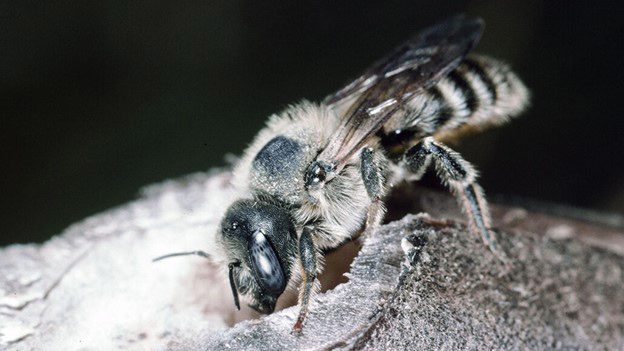 While adult bees and wasps make plenty of buzzy noises, their young have generally been considered silent. But the babies of at least one bee species make themselves heard, playing percussion instruments growing out of their faces and rear ends, researchers report February 25 in the Journal of Hymenoptera Research. The larvae’s chorus of tapping and rasping may be a clever strategy to befuddle predatory wasps.

Unlike honeybees, the mason bee (Hoplitis tridentata) lives a solitary life. Females chew into dead plant stems and lay their eggs inside, often in a single row of chambers lined up along its length. After hatching, the larvae feed on a provision of pollen left by the mom, spin a cocoon and overwinter as a pupa inside the stem.

Andreas Müller, an entomologist at the nature conservation research agency Natur Umwelt Wissen GmbH in Zurich, has been studying bees in the Osmiini tribe, which includes mason bees and their close relatives, for about 20 years. Noticing that H. tridentata populations have been declining in northern Switzerland, he and colleague Martin Obrist tried to help the bees.

“We offered the bees bundles of dry plant stems as nesting sites, and when we checked the bundles we heard the larval sounds for the first time,” says Müller. “This is a new phenomenon not only in the osmiine bees, but in bees in general.”

He and Obrist, a biologist at the Swiss Federal Institute for Forest, Snow and Landscape Research in Birmensdorf, gathered stem nests from the field and subjected them to various types of physical disturbance, trying to determine what kinds of pestering triggers the bee larvae to drum. In some nests, the duo cut windows into the stems to observe larvae through the translucent cocoon walls, unveiling the secret of how the insects were creating the noises. 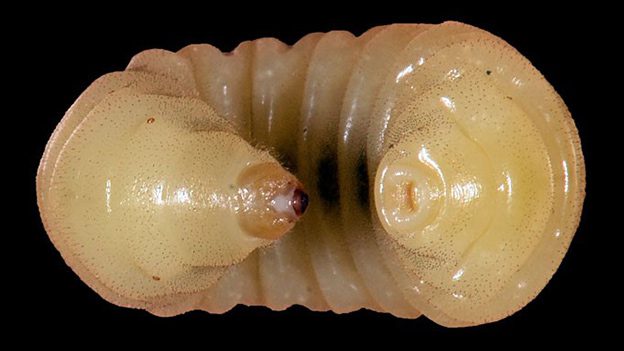 This larva of Hoplitis tridentata has two sound-producing calluses, observable as a milky, diamond-shaped patch on the face (left) and a raised, thickened ring encircling the anus (right). Andreas Müller

The sounds appear to be the first known among the larvae of hymenopterans, the insect order that includes bees, wasps and ants. The presence of two different instruments on the same animal may also be a first. “I am not aware of the larvae of other insect taxa that have two different organs to produce sounds,” says Müller.

Most of the behavior known about bees is from their adult stage, but many bees spend most of their lives as larvae or pupae, notes Robert Minckley, an entomologist at the University of Rochester in New York not involved with this research. “There is a lot to discover about this part of the life cycle. Plus, so few solitary bees have been studied at all” (SN: 12/31/06).

Minckley wonders how much energy this music making demands of the larvae, considering there’s a finite amount of food for them inside their brood cells. “Expending this energy is extracting a cost towards making it to the adult stage,” he says.

Such percussion may pay off by providing protection. It’s possible the bees’ rasping and drumming is an adaptation for growing up in such thin-walled surroundings, vulnerable to exploitation by “parasitoid” wasps. These wasps lightly tap a plant with their antennae, feeling for an echoing vibration that betrays the larvae’s location. The wasps then inject their own eggs through the stem wall into the brood cells. When those eggs then hatch, the wasp’s larvae consume the host alive.

The bee larvae’s loud rear end rasp may be an alarm signal to the nest once a wasp is detected, and the minutes of tapping afterwards may muddle the wasp’s senses. The wasps can take quite a while to locate their hosts, so this might explain why the larval tapping continues for half an hour or longer after the initial agitation. Müller next wants to see if the sonic probing of wasps induces the bees to start drumming.

A remarkably similar chorus is known in the larvae of a single species of wood-boring beetle (Icosium tomentosum). The beetle larvae mature inside dry tree branches, and spend minutes scraping their mouthparts against the inside of the bark when disturbed. This too has been suggested as a defense against parasitoid wasps.